Next up in my progress on Ships’ Folly (hex 17:12) in Tenkars Landing. I give you The Vexed Tower. 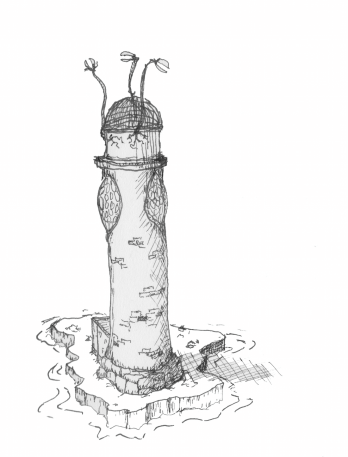 Centuries ago, right after the lighthouses were completed, the summoners were eager to activate their new and fabulous instrument. However, none had previously employed such potent symbol, and it was deemed wise to first complete a so called dry-run. A dry-run being the performance of an actual summoning ritual without invoking any Name and thus not pulling anything through the portal.

But alas, being inexperienced with such massive infrastructure, the summoners still leaked significant amounts of arcane energy onto several neighboring dimensions. The fact that no Name was uttered did, strictly speaking, only prohibit named creatures to come forward. It did not, of course, prevent an unnamed entity to do so.

And thus it came to pass that something unnamed managed slip through the portal just as the dry-run ritual was completed. A particularly stealthy and nasty and dark thing, this was.

But though powerful, the creature could not abide water. This was a problem, of course, out here on Ships’ Folly. The creature just barely managed to scramble unseen onto the island now known as the Ghulisle. There it hid, waiting to regain strength.

The years went by, but its power did not reinvigorate as fast as expected. Maybe because of the presence of so much water, or maybe this unfamiliar dimension itself was inhospitable. Still, this made no difference, its power must be restored some other way.

Finally, opportunity presented itself: A heavy storm smashed a ship onto the rocks of the island, and the creature consumed the energy of everything that clambered onto land. The empty vessels of this energy – the bodies – it raised as ghouls. And now, having discovered this savory source of energy, the creature has slowly devised a plan to for reclaiming its lost glory, and then some.

Now, many years later, the creature (still unnamed, because this pleases it) has claimed one of the lighthouses (now dubbed The Vexed Tower by local sailors) as its lair. About ten ghouls roam the island at night and another forty ghouls are locked up in the basement of the tower. The creature wants to relocate to a bigger island, or preferably a continent, but still has qualms about crossing so much water. For now, its agenda is to lure visitors onto the island and into the lighthouse, where it will proceed to guzzle both their blood and life force in a horribly efficient manner.

The creature does, of course, not receive as many visitors as it likes, but it is currently employing the following tactics to remedy that: