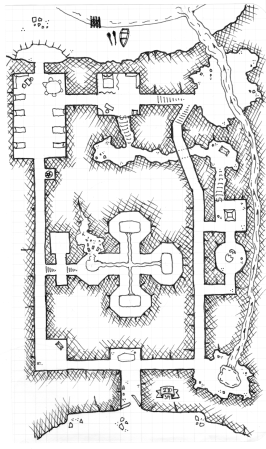 The dungeon on Twinge Isle, including the Elemental Forge

Out on the reef called Ships’ Folly lies the island and lighthouse called The Crabs. Its beaches are home to millions of crabs from a dozen different species. Many a sailor has leapt barefoot into the water to pull up a boat on the beach, only to find that his feet has now been stripped of all flesh, with only a sorry pair of skeletal extremities to put back into his boots.

Luckily, the crabs don’t leave the surf, so a landing is feasible with the correct precautions. Those who stay the night, however, may be out of luck as both the large hummer crabs and the tiny white scalpel crabs swarm the islands after sunset.

In spite of such inhospitable conditions, there are creatures that manage to get by here. In the old lighthouse, a dozen duergar reside. These hardy individuals were prisoners of war, but their transport ship got lost in the fog and broke its hull on a nearby reef. Amongst the shipwrecked, the dark dwarves were the only ones who did not end up as crab fodder.

The duergar settled in, especially after they discovered the dungeon below the lighthouse, and its peculiar forge. Eight years have now passed. The dwarves all stomp around in stone boots, crafted as a ingenious protection versus the crabs. And should a fight break out, they quickly don their crab shell armor (complete with pincer gauntlets) to stand and fight for what they now consider their home.

The avaricious dwarves have also discovered valuable ore in their dungeon. Also, they’re on the verge of figuring out what tremendous power an Elemental Forge can harness. Take the right amount of completely pure fire, water, air and earth. Pressurize the individual components exactly so. Mix with a slow stir, and bake it into the needed shape. It is said that the world itself is built by such Elemental Bricks, and that a single such brick may be used as foundation for the most magnificent feats of construction! Surly, such bricks must be coveted by engineers and royalty alike?